Continuing its inexorable two-decade decline from its peak in 1996, the number of prescriptions for homeopathy products supplied in community pharmacies in England fell by 23% in 2016. 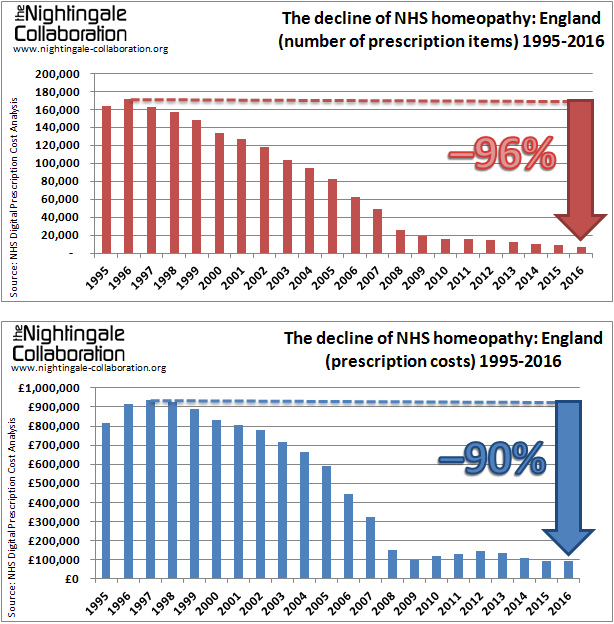 This drop is a welcome sign that the NHS continues to understand the need for robust evidence for treatments and that it does not exist for homeopathy. Although the mantra of choice is frequently repeated by supporters of homeopathy, providing a treatment for which there is no good evidence of specific patient benefit does not provide a choice to patients: they deserve better.

The House of Commons Science and Technology Select Committee in its Evidence Check on homeopathy concluded:

In the most comprehensive review to date of the evidence for homeopathy, the Australian National Health and Medical Research Council concluded:

With such damning conclusions, patient choice cannot be heralded as sacrosanct. Consumers are perfectly free to buy their own homeopathy products, but it behoves the NHS to provide treatments that are based on robust scientific evidence.

For some reason, the average cost for each homeopathy item jumped by 28% to £13.55 compared to the previous year's £10.60. This is a substantial rise and may have been due to a jump in the cost of raw sugar… or maybe the suppliers wanted to try to compensate for the decreased sales volume? Looking at what happened in 2010, there could be a pattern.

The next release of data for Scotland will be in June and will cover prescriptions from 01 April 2016 to 31 March 2017. There's no reason to suppose a similar decline won't be seen there too, particularly given the closure of the final seven in-patient beds at the Glasgow Homeopathic Hospital tomorrow: the legitimacy given to homeopathy by the NHS is slowly but surely being removed.

Proponents of homeopathy frequently state that it's used by 10% of the population. They usually don't cite any evidence to substantiate that figure, but it could come from the statement made by Prof Kent Woods — the then Chief Executive of the MHRA — when giving evidence to the Select Committee in 2009 (Q182, Ev 65):

From the point of view of evidence, certainly from a regulatory perspective, it is very important evidence that something like ten per cent of the population have used a homeopathic remedy or have gone to a homeopath in the previous 12 months, and that I think is a starting point for deciding what is the public health significance of this phenomenon.

He didn't provide a source for that figure and it's always been contentious. Now, however, we have a more up-to-date figure from the European Social Survey. In their 2014 survey, they asked questions about the use of a number of CAM practices (acupressure, acupuncture, Chinese medicine, chiropractics, herbal treatment, homeopathy, hypnotherapy, massage therapy, osteopathy, physiotherapy, reflexology and spiritual healing) in the previous 12 months in 21 countries. For homeopathy, they found that only 1.3% of people had used it: 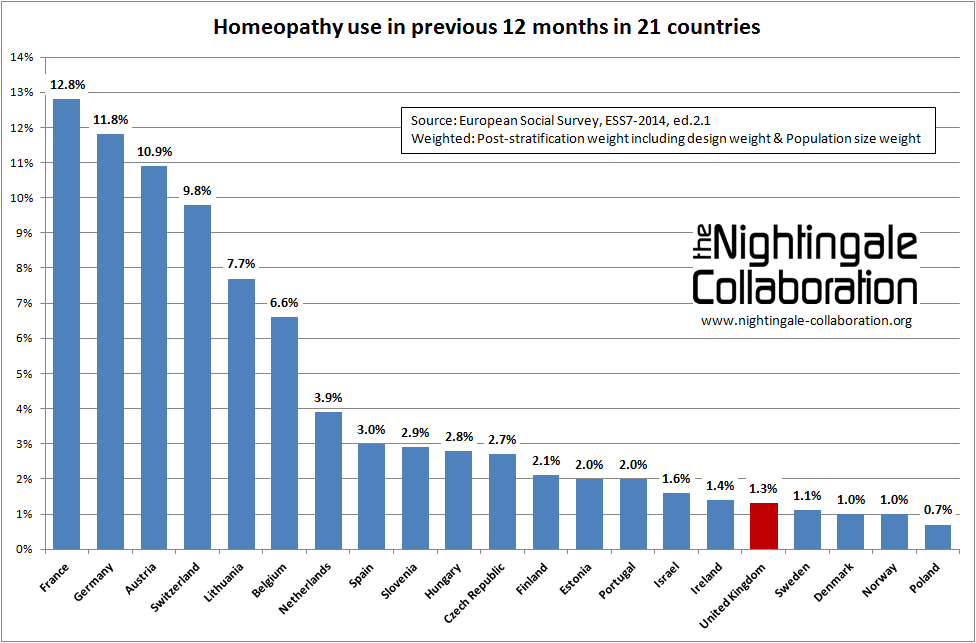 Ranking fifth, the UK compares very favourably with the other countries surveyed, and the usage is considerably less than previously claimed. It is also likely that even this is an over-estimate as the survey didn't provide any guidance to participants about what homeopathy was, so it's likely respondents may have included the use of all sorts of herbal or home remedies rather than just homeopathic products.

The same survey gives a picture of the usage of other practices in the UK: 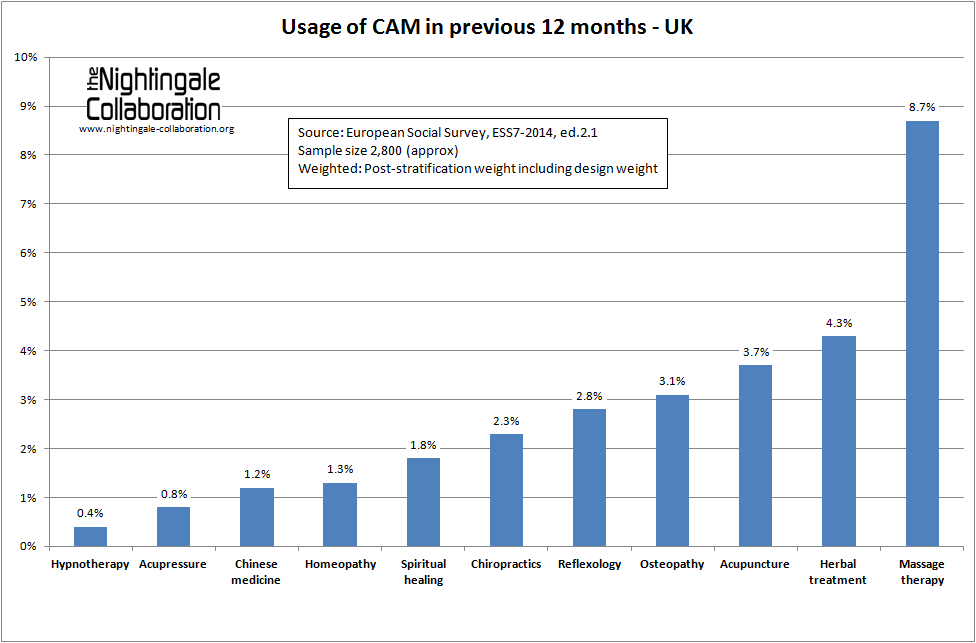 However, for homeopathy on the NHS, it's difficult not to come to the conclusion that it's dying.