NHS homeopathy in Scotland - on a shoogly peg

We've previously looked at how homeopathy in the English NHS has plummeted 95% in the last two decades. We now focus on what's been happening is Scotland.

The NHS in Scotland is separate from the NHS in England and they collate their prescription data separately, provided by the Information Services Division, a division of National Services Scotland, part of NHS Scotland. (Wales NHS and Health and Social Care in Northern Ireland are also separate and we may look at these in the future.)

Their Prescription Cost Analysis (PCA) data since 2001 (shortly after devolution in 1999) are available on one handy webpage, making them easier to find, with each spreadsheet covering the financial year from 01 April up to 31 March of the year given in the filename. The latest spreadsheet, PCA_2016.xlsx, therefore covers 01 April 2015 to 31 March 2016. Note that for consistency with the data for England, we have attributed the Scottish data for the year in the filename to the previous year in the charts below, ie the 2015/2016 data are attributed with 2015 to match the way the data for England have been attributed.

Tab 3 - BNF sub-section gives the data we need. As with the NHS Digital (the re-branded name for the HSCIC) data for England, the data relate to the NHS prescriptions dispensed in community pharmacies and by Dispensing Doctors in Scotland.

The prescription data are listed by BNF chapter, section and sub-section and the one for homeopathic (homoeopathic before 2013) preparations is 19.02.03. The data provided include the number of dispensed items, the Gross Ingredient Cost and the cost per item. Note that the costs given in the English data are called Net Ingredient Costs (NIC) but they are directly comparable: the Publication Report explains:

The main measures of drug ingredient cost and volumes of items dispensed in the community are comparable across the UK countries. However it should be noted that the gross ingredient cost (GIC) within Scotland is equivalent to the net ingredient cost (NIC) in England, i.e. the reimbursement cost of drugs before any pharmacy discounts are applied.

Collating these data from each of the years gives the following: 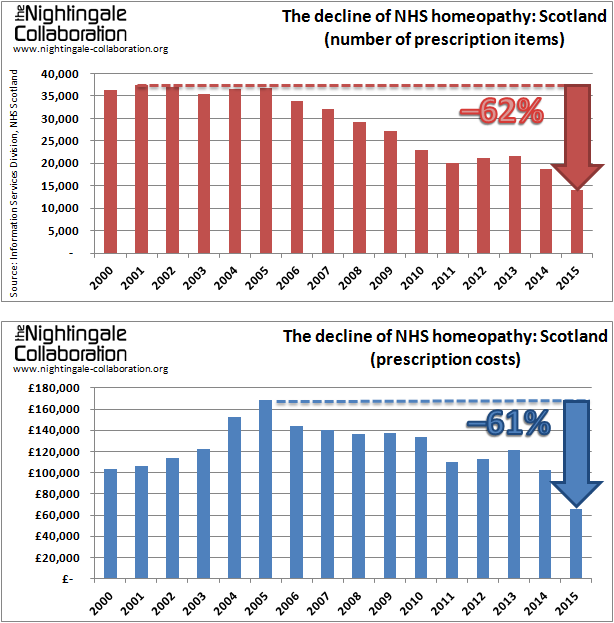 A spreadsheet with these data can be downloaded here.

But why the small rise in prescriptions in 2012 and 2013? Was there a resurgence in public demand for homeopathy? Perhaps more GPs became convinced of its curative power? Maybe some new, compelling evidence for homeopathy hit the headlines?

Probably not. The answer is more prosaic: the closure of the pharmacy at the Glasgow Homeopathic Hospital (re-branded the Centre for Integrative Care (CIC) recently) in 2011 will have caused a small increase in the number of prescriptions dispensed in community pharmacies.

When Andy Lewis revealed the closure of the pharmacy in November 2011, he said:

The ratchet on NHS homeopathy continues to turn. It would appear that the homeopathic pharmacy at the Glasgow Homeopathy Hospital has been closed.

A note to local GPs is reminding them that they have no obligation to fill the hole left by this closure by prescribing homeopathy if patients ask for it.

The Glasgow Local Medical Committee notes that there has been a sudden surge in requests from patients to prescribe homeopathic sugar pills after they have been unable to get them at the hospital.

The prescription numbers before 2011 don't include those dispensed at the GHH/CIC, but those after 2011 are inflated by the ones GHH/CIC patients have had go to their local community pharmacy to have dispensed.

The drop isn't as great as the 95% in England, but it is still very significant. Referrals to the GHH/CIC have been stopped by various Scottish Health Boards, putting pressure on them — it would seem unlikely that the long-term downward trend will be reversed.

The number of patients at the GHH/CIC has been falling in recent years. Data from NHS Greater Glasgow and Clyde (GGC) — the health board that runs the GHH/CIC — show significant drops in the number of new inpatients from areas outside of GGCin recent years but that has been partially offset by an increase in numbers of referrals from within the GGC area. Overall, the number has still fallen 9% in the past four years to 332 in 2015 — about one new patient a day.

Similarly, falls in the number of new outpatients referred from areas outside GGC has been compensated by an increase in local referrals, leaving the number hovering around the 1,000 mark each year — in the order of three new patients a day. They also had 4,723 return appointments in 2015.

The hospital is currently facing the closure by GGC of its seven inpatient beds (which had previously been cut in 2010 from 15 beds Monday to Sunday to seven beds Monday afternoon to Friday morning), saving £190,000, putting it under further pressure.

In their proposal to close the seven inpatient beds, they said:

The proposal to close the CIC beds is based on the fact that:

Supporters of the GHH/CIC are campaigning to prevent its closure, including a Public Petition to the Scottish Parliament: PE01568: Funding, access and promotion of the NHS Centre for Integrative Care. The committee has been considering this for well over a year and seem to be making little progress; instead they seem keen to show their inability to understand scientific evidence.

If the closure is agreed by the GGC Board, this makes the GHH/CIC even less viable and it's not clear how long the hospital can last — its future is on a shoogly peg.

As a reminder, the charts for England: 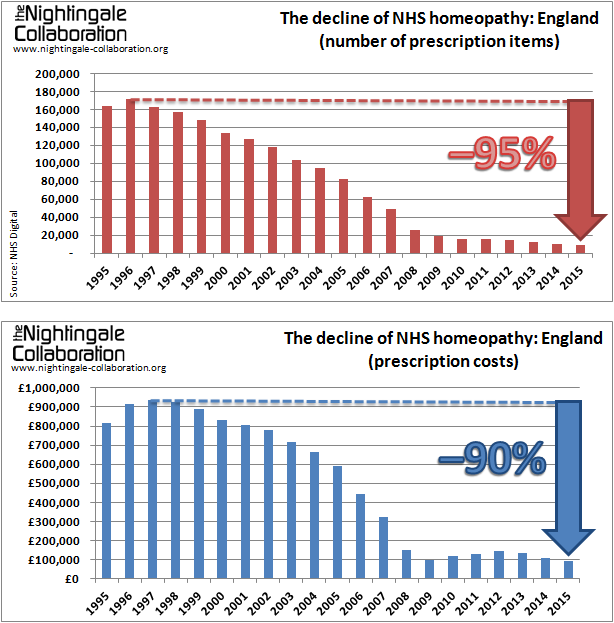 Combining these (from 2001 to 2015) give the following for England and Scotland together: 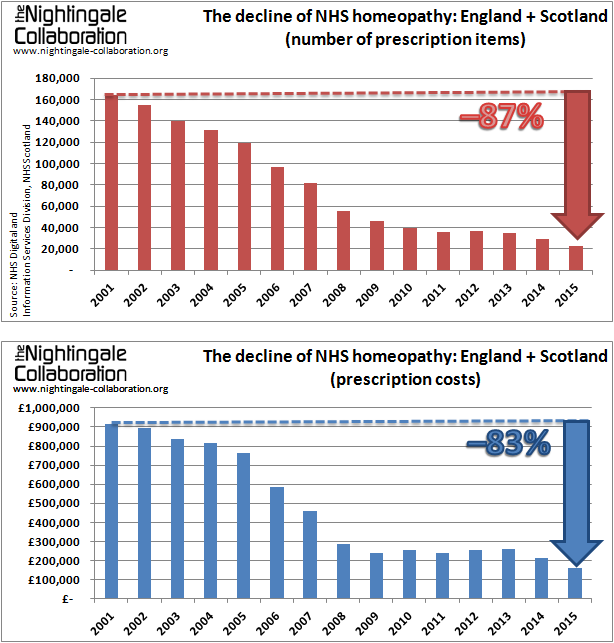 Homeopathy has been diluted to just 13% of its former self in the past 14 years. 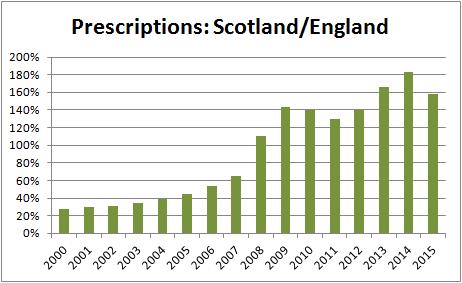 If it was simply down to population, you'd expect there to be more than ten times the number in England compared to Scotland.

Why is this not the case and why has it changed like this over the last 14 years?

One possible explanation might be to do with the number of NHS homeopathic 'hospitals' and the legitimacy they lend to homeopathy in general: there has only been the one in Scotland but there have been four in England in recent times: London, Bristol, Liverpool and Tunbridge Wells, plus a number of satellite clinics. Now, however, only the Royal London Hospital for Integrated Medicine remains, with the ones in both Liverpool and Bristol replaced by contracted private companies rather than being part of the NHS. The one in Tunbridge Wells closed in 2008. So, in its heyday around the turn of the century, Scotland was served by one but England was only served by four — proportionately far fewer considering the population.

So, with the only the London hospital now remaining — even though it no longer has a dedicated homeopathy service — the decline of prescriptions in England was perhaps inevitable, following the decline in the number of hospitals.

For those who do not believe public money should be spent on homeopathy, these figures will be welcome, but perhaps not so much for those in the homeopathy business as the false imprimatur given to homeopathy by the State plummets.