Rubbing salts into the wounds of homeopathy

Homeopathy has suffered many body blows recently. A new decision by the medicines regulator rubs salt into its wounds.

The last year or so has not been good for homeopathy. The comprehensive Australian National Health and Medical Research Council concluded that "there are no health conditions for which there is reliable evidence that homeopathy is effective." The FDA and the FTC in the US are considering their positions on the regulation and advertising of homeopathic products and will hopefully clamp down on the worst excesses of misleading claims made there. In the UK, homeopathy continues its downward spiral, it's being challenged in Liverpool and the Department of Health will consult next year of the complete blacklisting of homeopathy. 2016 is going to be a very interesting year for homeopathy.

Wilhelm Heinrich Schüßler (Schuessler) was a German medical doctor and naturopath. He concocted twelve biochemic 'cell salts' or 'tissue salts' (as he called them), intended to redress percieved bodily deficiencies in one mineral or another. Frequently referred to as 'microdoses' these are accepted as homeopathic by some homeopaths and rejected by others. When I asked one manufacturer, I was told:

Tissue Salts are not homeopathic but are homeopathically prepared micro dose minerals. Dr. Schuessler believed that it was most effective to follow the principles of homeopathy in their preparation – 1 part mineral to 9 parts lactose – mortar and pestle for 20 minutes bringing it up to a 1X and so on.  They can be touched by hand and work differently in the body navigating all that you eat and ingest where they need to be.  They are not as sensitive as homeopathics.  They can be taken alongside food, coffee etc.

Tissue Salts are not Homeopathics but are micro dose minerals that follow the similar method used in preparation - they will not interfere with homeopathic Nat Mur - it is important to note that Minerals are not homeopathic, they are biochemic. They do not follow the rule of similarity as many consider but are prepared in the homeopathic manner in order to provide bioavailability. The system needs minerals in order to function in these minute doses. They are absorbed through the mucosa that enables them direct entry to the blood stream and the availability to the cells.

Whatever the different factions within homeopathy believe, Schuessler Salts are frequently labelled and sold as being homeopathic. But are they as ineffective as homeopathy? The Commissioner for Public Health in Australia looked into one of these salts and declared: 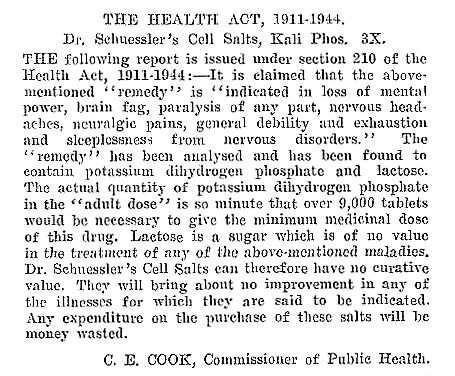 THE following report is issued under section 210 of the Health Act, 1911-1944:—It is claimed that the above "remedy" [Dr. Schuessler's Cell Salts, Kali Phos. 3X] is "indicated in loss of mental power, brain fag, paralysis of any part, nervous headaches, neuralgic pains, general disability and exhaustion and sleeplessness from nervous disorders." The "remedy" has been analysed and been found to contain potassium dihydrogen phosphate and lactose. The actual quantity of potassium dihydrogen phosphate in the "adult dose" is so minute that over 9,000 tablets would be necessary to give the minimum medicinal dose of this drug. Lactose is a sugar which is of no value in the treatment of any of the above-mentioned maladies. Dr. Schuessler's Cell Salts can therefore have no curative value. They will bring about no improvement in any of the illnesses for which they are said to be indicated. Any expenditure on the purchase of these salts will be money wasted.
— C. E. COOK, Commissioner of Public Health

One of the main brands of these products is an Australian company, Martin & Pleasance, but there are others, including the New Era range (once owned by the pharmaceutical giant, Merck through their Seven Seas brand, but now owned by the Italian company, Olimed Ltd, sold in the UK by Power Health Products Limited).

It was the Martin & Pleasance products we found being advertised on Nelson's website. Because they do not have a licence under the National Rules Scheme, an authorisation under the Homeopathic Rules Scheme nor even a (defunct) Product Licence of Right, we questioned whether these could be unlicensed medicines. The significance is that if the MHRA ruled they were unlicensed medicines, it would be a breach of the Human Medicines Regulations 2012 (HMR 2012) to advertise, supply or sell them. 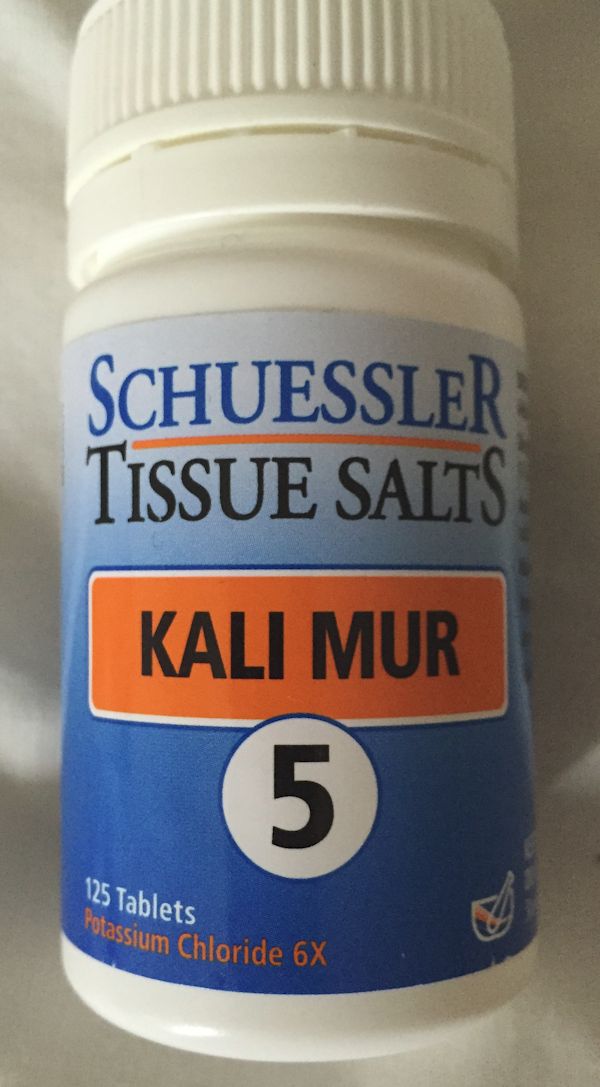 Today, the MHRA published their decision on a complaint about the advertising of these or similar products by Homeopathy Express, Nutricentre and Health Stuff. Although these were not our complaints, the MHRA have now published what they told us previously about Schuessler products and what we've been trying to get them to state publicly:

MHRA guidance: Tissue Salts/Schuessler Salts are considered to be medicinal products if any of the following appear in promotional material: All other cases will be reviewed on a case-by-case basis.

So, it's perfectly OK to advertise these products as long as it is not claimed that they are in any way homeopathic, they do not have a homeopathic 'potency' and they have no therapeutic indications. If they comply with all of these restrictions, they will not be medicines, but will simply be food supplements and have to comply with food regulations. This is essentially the same as when Bach Flower products were declared to be foods, not medicines nearly a year ago.

The standard labelling of these products (such as the one in the photograph) stated they were '6X' 'potency' and the mere mention of this is sufficient to bring it within the MHRA's definition of a homeopathic medicine. This is a direct consequence of the EU Directives and the HMR 2012: homeopathic 'medicines' are regulated and anything that is presented as being homeopathic is a medicine and has to comply with these rules.

If they are not presented in any way as homeopathic, then they are just foods, not medicines. 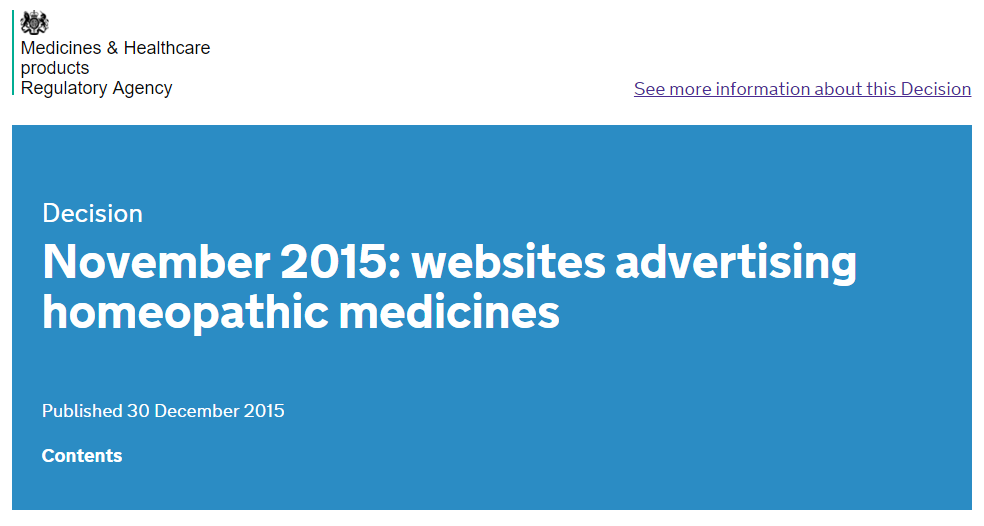 Quite rightly, the MHRA will review each product individually, but we think it's clear that this ruling applies to the following:

There may be others and if you spot any on sale in the UK that appear to be contravening the MHRA's new guidance, please let us know and consider submitting a complaint to the MHRA about them.

There is now no mention that these products are homeopathic.

But what about the websites of the three sellers mentioned in the MHRA's decision?

This is advertising New Era Calc Sulph (No.3) Tissue Salts and Brittle Nails & Falling Hair (Comb - K), but both are currently not available and another page says they have been discontinued. It looks like they also used to sell the Dr Reckeweg brand of tissue salts but they have been removed.

Whatever Schuessler/cell/tissue salt products they sold, they are no longer advertised on their website.

Thirteen of the sixteen Schuessler products they advertise are currently out of stock.

For two of the three that are available, the description shows:

Congestion by Schuessler Tissue Salts. Kali Mur Nat Mur & Ferr Phos For relief from symptoms associated with Chest congestion Coughs Colds Available in tablets. Always read the label use only as directed. If symptoms persist consult your healthcare professional. For over 150...

Schuessler Combination H Tissue Salt is a complete natural formula for hayfever and allied conditions with mag phos nat mur and silica. Hayfever is an allergic condition of the mucous membranes of the nose eyes and upper respiratory tract and is common during spring when sensitivity to pollen is severe but it is very treatable by combination H particularly if treatment is started from six weeks before the expected onset of normal symptoms.

For Calc Fluor No 1, although out of stock, the product page states:

Many of the others have similar information.

These would appear to be therapeutic indications and some refer to the potency as 6X, possibly contravening the MHRA's guidance so we'll be bringing these to their attention and hope that they will be corrected before the products return to stock.

This is another step forward for informed consumer choice, but another blow for homeopathy. Gradually, sellers of homeopathy and homeopathy products are being held to account. Homeopathy is taking a beating, perhaps fatally wounded.

I have just come across this advert for New Era Tissue-Cell Salts in the February 1951 issue of the homeopathy magazine, Heal Thyself: 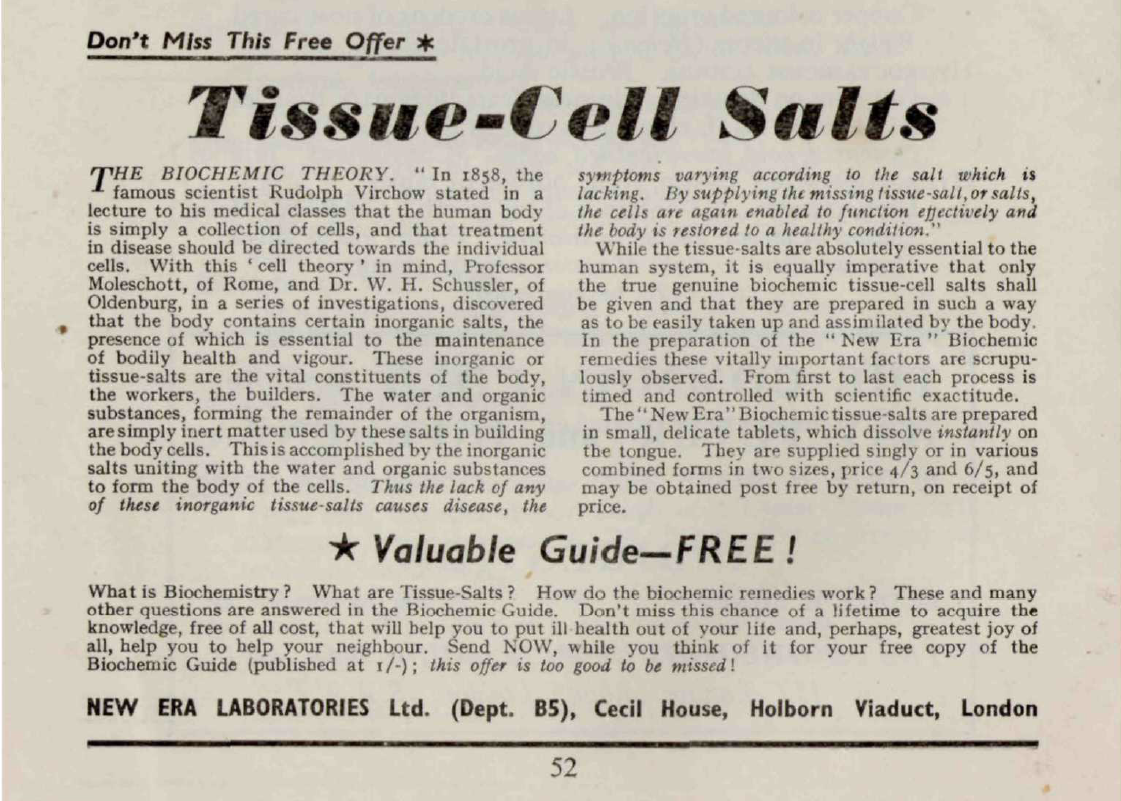 It's a pity the Advertising Standards Authority wasn't around then.