On a downward spiral

Not that long ago there were five homeopathic hospitals in the UK: London, Tunbridge Wells, Bristol, Liverpool and Glasgow. The Tunbridge Wells and Liverpool hospitals have since closed and the pharmacy at the Glasgow one is no more.

As for the Bristol hospital, it started out in its own building near the centre of Bristol (Cotham Hill), then it became a small clinic in the new South Bristol Community Hospital. Earlier this month, just three years later, this too closed to be replaced by a private clinic, the Portland Centre for Integrative Medicine, that is no longer part of the NHS but that is now just contracted to provide homeopathy services to University Hospitals Bristol. It's situated in Litfield House Medical Centre, which offers private consulting rooms, some six miles from the hospital.

And then there were two

NHS Lanarkshire was the latest of the Scottish health boards to end funding of all treatments at the Glasgow Homeopathic Hospital, and, in August, one of it's previous patients from Lothian lost her judicial review at the Court of Session of the earlier decision by NHS Lothian, finally putting an end to the homeopathy supporters' protracted battle.

But now we know that even the jewel in the homeopaths' crown, the RLHIM, no longer has a homeopathy service.

We've known this for some time as it was admitted by them in their response to a Freedom of Information Act request last year and this service has not been mentioned on their website for some time. It is now public thanks to someone else's FOIA request. All they provide now are:

But no homeopathy service. For their flagship hospital, closing that down must have been a bitter sugar pill to swallow.

Even though homeopathy isn't mentioned they still provide it under the guise of other services. The list of services doesn't match those listed on their website (and there are some interesting differences), but some do include homeopathy:

Of course, we've won several Advertising Standards Authority rulings and informally resolved cases against the RLHIM over claims they made on their website and in leaflets. In Homeopathy clinic toes the line, we briefly mentioned Prof David Colquhoun's blog post: Conflicts of interest at the Homeopathic Hospital. It's good to see that the RLHIM has since made this clearer:

And in overall terms, we also already know that the number of prescriptions for homeopathy products supplied by community pharmacies in England has fallen by 94% in the past 17 years.

How much longer will NHS homeopathy survive this downward spiral?

After Nelsons were reprimanded in August (as a result of our complaint), another homeopathy manufacturer was today admonished by the medicines regulator, the MHRA. 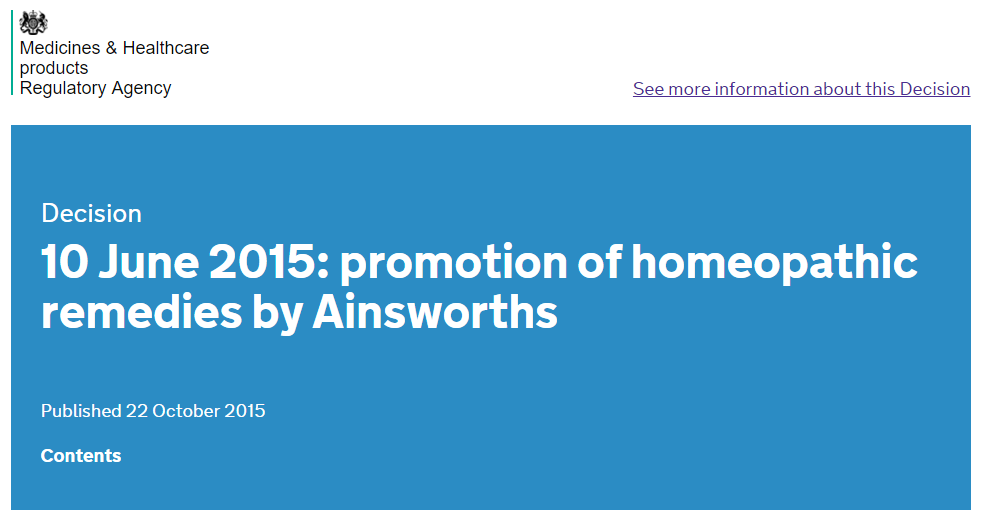 As part of MHRA’s regular review of advertising, we reviewed the Ainsworths website. Some unlicensed homeopathic remedies had the name of a commonly recognised disease or medicine. We were concerned that this could be seen as a claim to treat or prevent that disease. We were also concerned that remedy kits containing unlicensed remedies were being promoted for sale in the UK.

Ainsworths agreed to remove the name of the disease and the medicine names from unlicensed remedies on their price list and amend the web pages with remedy kits.

It's encouraging to see that the MHRA instigated this themselves rather then waiting for a complaint from a member of the public or a pharmacist, but it's disappointing that they have not given details of what products they were concerned about.

In terms of the kits, they have been in trouble before, so it's disappointing to see them being pulled up again, apparently for exactly the same breach of the medicines regulations.

Note that the decision is dated 10 June, yet the decision was only published today. It's therefore even more disappointing and concerning to see Ainsworths still advertising unlicensed remedies such as these: 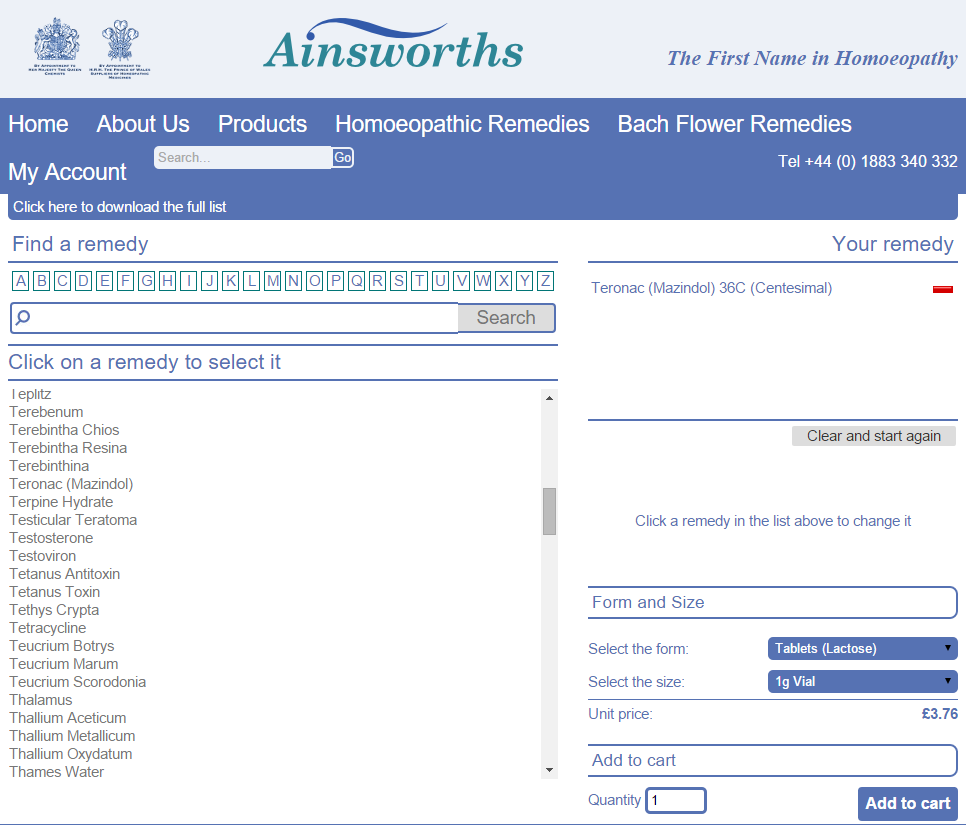 We sincerely hope that Ainsworths will comply with the MHRA's instructions to remove all products with the name of a commonly recognised disease or medicine, and — in the interests of not misleading the public — products that have names very similar to commonly recognised diseases or medicines. We're sure Ainsworths would not want to mislead consumers but we hope the MHRA will continue to monitor their website and take further action as necessary to protect consumers.