The list of misleading adverts in the magazine What Doctors Don't Tell You sometimes seems endless, 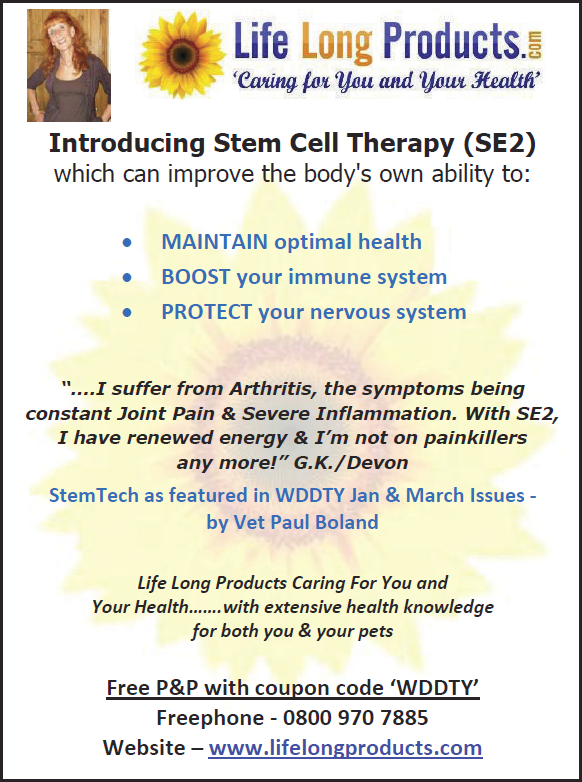 The April 2015 issue of What Doctors Don’t Tell You carried an advert by Life Long Products for their 'Stem Cell Therapy (SE2)' product that claimed it could improve the body's ability to:

The testimonial in the advert could also give the impression that arthritis sufferers using this product can stop using painkillers.

As has been noted elsewhere, there is frequently a connection between adverts and articles, and this one boasts:

Can stem cell therapy provide these benefits? The product page on the advertiser's website states:

Stemtech’s SE2® is the world’s first all-natural supplement documented to support the release of adult stem cells from bone marrow. Our advanced supplement puts more stem cells in the bloodstream, and the effect lasts longer.

This 'advanced supplement' doesn't come cheap, of course: a bottle of 60 capsules costs £60.95 (plus shipping), but it might seem a bargain if the claims stood up to scrutiny.

But this product isn't regulated by the Human Fertilisation and Embryology Authority or even the Medicine and Healthcare products Regulatory Agency (MHRA): it isn't stem cell therapy derived from bone marrow, umbilical cord blood, etc, but simply a food supplement.

As a food supplement, the only claims permitted in advertising are those listed on the EU Register of nutrition and health claims and in the UK, those advertising claims are regulated by the Advertising Standards Authority (ASA).

Because we didn't believe the claims being made were authorised claims, we submitted a complaint to the ASA.

While we were at it, we looked further at the advertiser's website and included complaints about some of their other products: Jamu (cached), Forever Freedom® Aloe Vera Juice (cached), Serrapeptase (SerraEnzyme)- High Potency Capsules (cached) and PainSolv MkV Class IIa Medical Device (cached).

The page for the Jamu product no longer exists and the advertiser appears to have completely removed it from their website, but they had claimed:

Jamu (formerly Djamu) is traditional medicine in Indonesia. It is predominantly herbal medicine made from natural materials, such as parts of plants such as roots, bark, flowers, seeds, leaves and fruits. Materials acquired from animals, such as honey, milk, Ayam Kampung eggs and goat’s bile, are also often used.

…and they listed more than a dozen products in the range with descriptions such as 'Cholesterol Control', 'Naturally Lowers Blood Pressure', 'Naturally Dissolves Kidney Stones' and 'Naturally Reduces Blood Glucose Levels'.

The ASA originally said they would contact Life Long Products and ask for their comments on several points they identified in the website advert for PainSolv references to pain reduction and management; some of the claims were made in a video on their website, but which is also within the ASA's remit. The advertiser could then provide the required evidence to substantiate the claims or agree with the ASA to remove the claims.

For the other points of the complaint about the supplements and Jamu herbal product, the ASA said those were sufficiently straightforward and would take them up informally with the advertiser, asking them to:

…remove the health and disease claims from their Stem Cell Therapy, Aloe Vera and Serrapeptase, and to remove the Jamu products from their marketing activity.

Although not stated, we believe the Jamu products were unlicensed medicines that would be a breach of the Human Medicines Regulations 2012 to advertise, supply or sell to the public and we're pleased to see that there is now no reference to these products on the advertiser's website.

Serrapeptase has, of course, been the subject of a previous complaint of ours against an advertiser in What Doctors Don't Tell You. That time, the ASA adjudicated on the evidence Good Health Naturally provided but ruled it was not adequate to substantiate the claims made. They upheld our complaint on all four points, identifying eight breaches of their CAP Code.

However, instead of providing evidence to substantiate their claims for PainSolv, the ASA notified us that the advertiser had agreed to:

…implement suitable changes to their website to bring it in line with the CAP Code.

So, instead of an adjudication, the ASA have today published the outcome of our complaint as an informally resolved case.

Except… although the advertiser has removed all mention of their Jamu products from their website, we see no other changes as yet.

If those pages don't change soon, we'll bring them to the attention of the ASA.

The charity HealthWatch (not to be confused with the recent NHS organisation "Healthwatch England") has a study under way to test the effectiveness of consumer protection laws against misleading health claims.

A previous study by HealthWatch, Spurious Claims for Health-care Products: An Experimental Approach to Evaluating Current UK Legislation and its Implementation found some worrying results showing widespread variation in the application of consumer protection law and a reluctance to enforce it to protect consumers. Now is the time to build on that research with this bigger study.

Useful data are coming in, but more volunteers are urgently needed.

The study comprises these steps:

All data are captured in a suite of online forms, and results will be submitted to a major journal.

If you are interested, please contact HealthWatch trustee Les Rose. Although it's not at all labour-intensive (so the current team reports), please only volunteer if you have the time.