Another WDDTY advertiser in hot water

Our last sojourn into adverts in the monthly magazine, What Doctors Don't Tell You (WDDTY) concerned claims about Treating Ebola with 'bioresonance'. 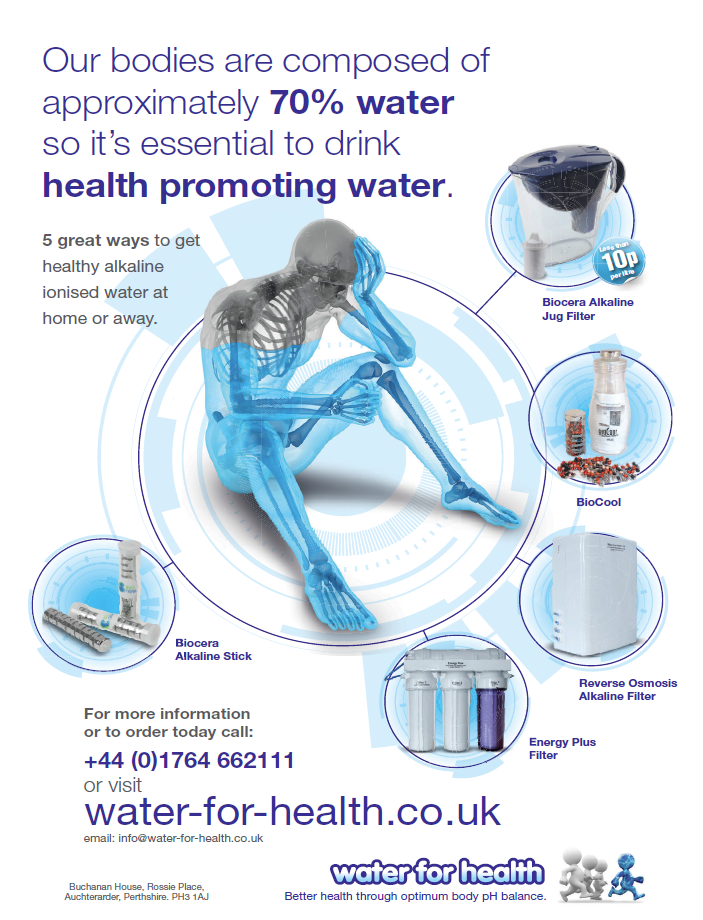 This time, we submitted a complaint to the Advertising Standards Authority (ASA) about an ad by Water for Health Ltd in the December 2014 and January 2015 issues and the advertiser's website. In their adjudication published today, the ASA identified two points and upheld them both.

Because of the number and extent of the claims being made, the points relate to those claims made on the advertiser's website, but the ruling applies to all media where the same claims are made — including WDDTY ads, of course.

Not just any Water…

The WDDTY ad and their website made several claims about the health properties of water: not just any water, but 'healthy alkaline ionised water'. The website claimed:

Alkaline nutrition has tremendous therapeutic power and is also vitally important to support your body if you are undergoing conventional medical treatment.

The claims we complained about included:

Green Food Supplements contain the nutrients to help to:

Many of our natural health foods are also thought to play a significant part in:

Chia Seeds are thought to help you:

Furthermore, taking an omega 3 Supplement like one of Omega Nutrition’s flax oils is recommended by several natural cancer treatment protocols, including the Budwig program and Gerson Therapy, and recent research also suggests that they may play a part in preventing neurological diseases such as Bipolar disorder.

Broccolo [sic] forte can help you to to [sic]:

The phytonutrients in organic prunes are also thought to help neutralize many of the harmful oxygen free radicals implicated in the development of:

“I love the water. My skin is healing in front of my eyes.”

“All of the above have enabled me to reduce my prednisolone (steroids) with no difficulties and I can now see the end of their use within the next few months. My health has been turned around.

The ASA listed many of these and condensed them down to two points of complaint:

The Nightingale Collaboration challenged whether:

Water for Health told the ASA that although they disagreed with the issues raised they had revised their advertising.

In their assessment, the ASA cited EC Regulation 1924/2006 on Nutrition and Health Claims made on Foods and pointed out that they were part of their CAP Code, saying:

…only health claims that appeared on the list of authorised health claims (the EU Register) could be made in ads promoting foods and that marketers must also ensure that they met the conditions of use associated with the claims in question. Health claims were defined as those that stated, suggested or implied a relationship between a food, or ingredient, and health.

The Regulation stated that references to general benefits of a nutrient or food for overall good health or health-related wellbeing were acceptable only if accompanied by a specific authorised health claim. Although some claims had been revised, we considered that they retained their original meaning. For example but not limited to, the revisions to the claims for Maximized Turmeric Curcuminoids, Clean Chlorella and Brocco Forte, which we considered were likely to be understood as general health claims, were not sufficient to alter their original impression.

We also considered that in the context of the ad, which included no reference to specific types of detoxification, "enable detoxification" for Chia Seeds, "Detoxifies and helps purify the body" for Clean Chlorella and "remove toxins" for Brocco Forte were likely to be understood to be general health claims. We noted that they were not accompanied by a related specific authorised health claim and were therefore not acceptable.

The ASA detailed the issues they had with the claims made and concluded:

Because the ad made general health claims which were not accompanied by a related specific authorised health claim, and included specific health claims, and a reduction of disease risk claim, for which evidence had not been provided that they were authorised on the EU Register, and because it included prohibited claims that the advertised foods could prevent, treat or cure human disease, we concluded that it breached the Code.

The second point of the complaint was about the claims for alkaline water. The ASA ruled:

Although Water for Health had told us that their ad had been revised, claims for "Alkaline Nutrition" continued to make the same claim that it "has tremendous therapeutic power and is also vitally important to support your body if you are undergoing conventional medical treatment". We considered in the context of the claims for the product's purported benefits for the body, the reference to alkaline nutrition's "tremendous therapeutic power" and that it was "vitally important to support your body" were likely to be understood as a general health claims, which we noted were not accompanied with a related specific authorised health claim as required by the Regulation. Because these general health claims were not accompanied by a related specific authorised claim, we concluded the ad breached the Code.

So another misleading WDDTY advertiser.

With this one, we now have 11 adjudications and 12 informally resolved cases against WDDTY advertisers and at least one of these advertisers — and WDDTY regular — Wholistic Research, has now ceased trading:

The ASA provide several pages of guidance on the rules for health and nutrition claims for foods including:

These rules stem from the European Commission Regulation No 1924/2006 — the various authorised and non-authorised claims can be checked in the EU Register on nutrition and health claims.

(The ASA also helpfully provide a (non-exhaustive) list of some 444 Acts and regulations affecting advertising.)

The Government also produce Guidance on nutrition and health claims on foods, which states:

With all this advice and guidance, there should be no need for any advertiser to make non-authorised nutrition and health claims for foods. Additionally, the ASA offer free advice to advertisers via their Copy Advice Team as well as other help to prospective advertisers.

If Water for Health weren't aware of authorised and non-authorised claims under the Regulations, they are now. We welcome their decision to amend their advertising even if that initially did not go far enough to satisfy the ASA. They have made other changes, but we don't think it yet complies and we hope that they will look again at the claims they made for the products mentioned in the ASA's adjudication and ensure that they are now compliant.

They might also like to check the claims they make about the other products they advertise — whether on their website or in the pages of What Doctors Don't Tell You.

There can be no excuse for not complying with the rules, regulations and laws in place to protect the public.