This is Dulwich Health's second appearance here. It's another food supplement; this time one called OxyTech. The advert in October's issue of What Doctors Don't Tell You said:

OxyTech regenerates your colon lining, so that it functions normally.

Can children take OxyTech? It is ideal for children at any age who are constipated or are taking antibiotics. If the child is too small to swallow capsules, the contents from a capsule can be spread on food, mixed in a smoothie, taken with honey etc.

If I get food poisoning? Take a large dose of OxyTech (say up to 10 capsules) as soon as possible.

My baby has colic? If you are breast feeding, you take OxyTech to regulate your body. If bottle feeding give baby OxyTech powder by teaspoon mixed with honey.

In their adjudication published today, the the last time ruled that because OxyTech was a food supplement, the CAP Code prohibited:

…marketing communications that claimed that a food could prevent, treat or cure human disease, and required reduction-of disease-risk claims and claims that referred to children’s development and health to be authorised by the European Commission. Because the ad made prohibited claims and we had not seen evidence that the reduction-of disease-risk claims and claims relating to children’s health were authorised by the European Commission, we concluded that it breached the Code.

The ad must not appear again in its current form. We told Dulwich Health Ltd not to state or imply that their products could prevent, treat or cure human disease. We also told them not to make reduction-of disease-risk claims and claims that referred to children’s development and health unless authorised by the European Commission. We referred the matter to CAP's Compliance team.

In response to the ASA, Dulwich Health said:

Dulwich Health Ltd acknowledged receipt of our letter and said they noted our comments.

Just like the last time, they made no attempt to justify or substantiate the claims they made.

But this time, the ASA have referred the matter to their Compliance Team who will try to work with Dulwich Health to ensure future marketing complies with the CAP Code. We hope that Dulwich Health will cooperate and take their responsibilities under the CAP Code seriously to ensure all their marketing — including that on their website — complies.

It's worth emphasising that, in general, the same rules apply to all advertisers, regardless of the product or service they are marketing. There are, rightly, some additional rules for adverts about health products, but all advertisers have an obligation to ensure their adverts comply, whether they are advertising food supplements, double glazing, solar panels or car insurance.

Last October, we started to tell you about What Doctors Don't Tell You, and that we had submitted complaints about 26 adverts that had appeared in the first two issues. The following table shows our progress (the advertisers' names link to our news item about them and with the advertisers' website added):

These outcomes gives us:

With 54 CAP Code breaches in just nine adjudications on eleven adverts and complaints on another eleven adverts informally resolved, we now have a further four still to be resolved.

But we've already had to submit a complaint about one advert to the medicines regulator, the MHRA, because the advertiser didn't seem to recognise the authority and competence of the ASA.

Several of the other issues were about medical claims made for supplements — will they also have to be reported to the MHRA if they continue to make similar claims in the magazine or on their websites?

This will hopefully be the last time the high street chain gets a mention here.

Despite previous assurances that all the prohibited point-of-sale advertising material for the Nelsons homeopathic products they sell had been removed from all their stores last summer, one of our supporters told us this was not the case. Last October, we submitted a third complaint to the medicines regulator, the MHRA, with a photo of prohibited material in their store in the Trafford Centre in Manchester. The complaint was fairly quickly resolved, but it has taken the MHRA nearly four months just to publish the details on their website.

In their notice, published on Monday, the MHRA said:

This was the third complaint around this issue, which was previously investigated and upheld in November 2011 and July 2012. Holland and Barrett had previously agreed to withdraw the materials from all stores and implement measures to try to ensure this would not happen again.

The MHRA upheld this complaint and warned the company about compliance. Holland and Barrett immediately ensured the material was withdrawn from the store subject to this complaint. They issued another recall to all Holland and Barrett stores this time requesting that all stores confirmed no Nelsons materials were present and introduced more robust procedures to ensure future compliance.

Our original complaint was about the booklets that were part of the display stands (and we have also been sent photos of other advertising cards). These booklets contained indications linked to the homeopathic products. Under the terms of the registration of these products, indications for what they might be used for are prohibited. We also originally complained about the labels on the display stand that said: 'First Aid', 'Aches & Pains', 'Skin, 'Colds & Infections', Women’s health' and 'Digestion'. We believed these too could be seen as prohibited indications, so we reminded the MHRA that these had also been part of our complaint. The MHRA told us:

We had forwarded your concerns regarding the display labels and H&B were not able to gain justification from Nelsons for their use, hence the decision to remove them.

Holland and Barrett issued yet another memo to all their stores on 30 November 2012 to ensure all prohibited advertising had been removed:

You must remove all Nelsons literature including any flip books that are attached to stands immediately; otherwise we will be facing enforcement action from the MHRA/IMB.

They included this diagram to illustrate what should be removed: 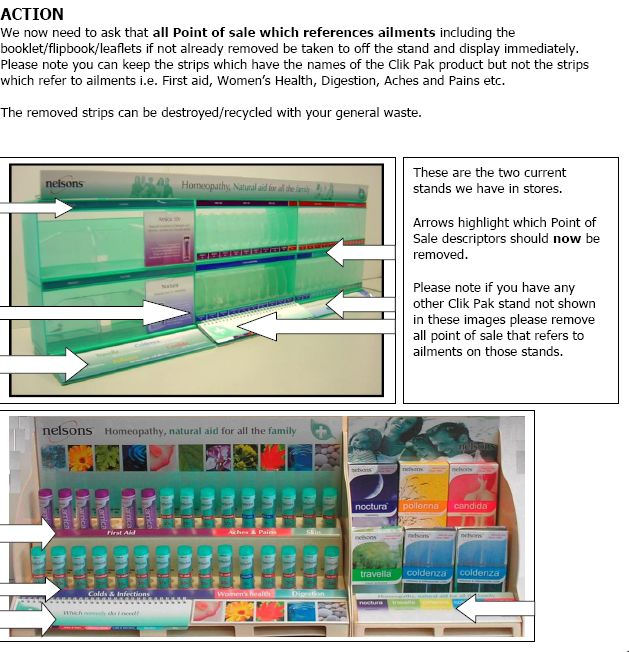 We sincerely hope this is the end of the matter and that no store — whether Holland and Barrett or otherwise — now misleads the public by displaying prohibited advertising material. But if you see any, please let us know.