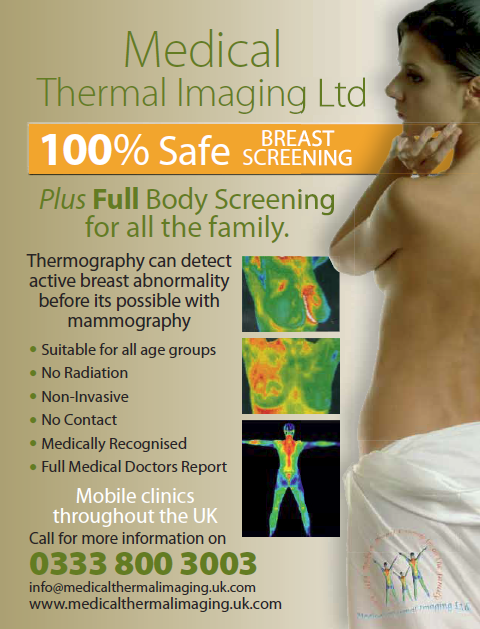 There is certainly a debate to be had over the benefits and harms of screening for breast cancer but there is no real debate over whether breast cancer can be reliably detected using thermography.

Thermography claims that active breast tissue can be detected through the increased heat it generates compared to the surrounding tissue and this can be detected by a thermal imaging device. Whilst this might sound plausible and there may be some reason to believe this might be the case, there are many reasons to doubt claims about the effectiveness of thermography over conventional mamography.

As Dr Margaret McCartney, author of The Patient Paradox, told us:

It's clear that thermal imaging of the breast is not as effective as imaging using xray. Breast screening itself needs debate as it produces harms. Using even less effective methods of screening is likely to produce far more harms in terms of false positives and false negatives. There's a reason why it's not recommended by UK regulatory bodies — it isn't effective enough.

In the first two issues of the monthly magazine, What Doctors Don't Tell You, there was an advert for thermography screening service. This made the claims:

We challenged those claims and the Advertising Standards Authority have today published their adjudication, upheld on both points.

In their response to the ASA, the advertisers, Medical Thermal Imaging Ltd, trading as Breast Angels, claimed that abnormalities released nitrous oxide which was then converted into nitroglycerin and this was detected by thermography.

However, they failed to supply robust clinical evidence to substantiate the claims made in the advert. The ASA concluded that the ad therefore breached the CAP Code and was misleading.

Since Breast Angels appear to be making similar claims on their website (in fact, they have a copy of the same advert), we sincerely hope that they take note that the ASA's adjudication, although about a magazine ad, applies to all other forms of marketing.

Selling supplements is big business. Even though very few of us actually need them, that doesn't stop many manufacturers making bold announcements such as 'The future of Supplements has arrived'.

This particular advertiser in What Doctors Don't Tell You, Abundance & Health Ltd, in an advert for their Lypo-Spheric™ product, claimed:

We challenged whether the advertiser could substantiate these claims.

The ASA consulted the medicines' regulator, the MHRA, who said that this product was not a medicine but a food. The ASA therefore considered the product under section 15 of the CAP Code (Food, food supplements and associated health and nutrition claims).

Instead of supplying evidence for the claims they were making, the advertiser accepted that the claims were not compliant with the CAP Code and gave an assurance that they will not feature in future advertising.

Even though this was 'informally resolved', as opposed to an adjudication, the advertiser still gets a mention on the ASA's website today. We hope that the advertiser takes this opportunity to review his website for compliance with the CAP Code.

This advert for yet another supplement appeared in the very first issue of What Doctors Don't Tell You and made claims about their product and Restless Leg Syndrome.

We challenged the claims:

Increasingly, they are turning to vitalCALM, a new natural supplement that deeply nourishes the brain and nervous system to improve dopamine levels/function and calm restless legs.

The advertisers, Simply Vital Ltd, when contacted by the ASA, assured them that the claims will be removed in future advertising. They too get a mention of the ASA's website today.

We sincerely hope that Simply Vital will remove similar claims on their website advert for this product and review the rest of their website to ensure it is CAP Code compliant, taking advantage of the free advice the ASA's Copy Advice Team offers if necessary.

Now that the ASA have published the outcomes of half of our 26 complaints, it's a good time to reflect on the numbers.

The ASA have been able to informally resolve ten of our complaints with the advertisers and so far have published adjudications on a further three.

Those three ads alone have amassed a total of 17 CAP Code breaches.

And there are far more to come.

We will update this chart as the ASA publishes further outcomes.

In November 2010, we complained to the ASA about a number of leaflets produced by the Royal London Hospital for Integrated Medicine (the renamed Royal London Homeopathic Hospital). The ASA's adjudication on their 'Medical and Clinical Hypnosis' leaflet is also published today.

Hypnosis can benefit almost anyone to improve their physical, emotional and mental health.

Research has shown that hypnosis can help regulate various systems of the body, such as the Immune System, Nervous System and Gastro-intestinal System.

The following medical problems been shown to benefit from the use of medical hypnosis:

We questioned whether these claims could be substantiated.

The RLHIM's plethora of evidence

The RLHIM supplied the ASA with numerous clinical studies and research papers that they believed supported the claims.

The ASA identified seven issues and the adjudication upheld all of them except two (chronic pain and cancer pain), concluding that they had substantiated those claims.

However, it ruled that all the other claims were misleading, identifying a total of 15 breaches of the CAP Code.

This now sets a precedent for all advertisers of hypnotherapy and we hope that other practitioners will review their advertising and amend as necessary.

We hope that they will promptly heed the ASA's Action:

The leaflet must not appear again in its current form. We told RLHIM to ensure that they held robust evidence to substantiate efficacy claims in the future.

As we said above, any compliance action required by the ASA applies to all forms of advertising, not just the one the complaint refers to: if claims are deemed misleading, they will be misleading regardless of the medium of the advertising.

We have several other complaints about the RLHIM's leaflets that are still being investigated by the ASA and we hope to publish more outcomes shortly.

We are looking for a JavaScript programmer to help us with an exciting project we're working on. If you're interested and have some time to spare — and especially if you have experience writing Google Chrome extensions — please contact us with an outline of your skills and skeptic credentials.