We will have several more informally resolved cases and full adjudications for you very shortly as the Advertising Standards Authority (ASA) work their way diligently through our complaints about 26 adverts in What Doctors Don't Tell You.

Today we have one more to add to the growing list. 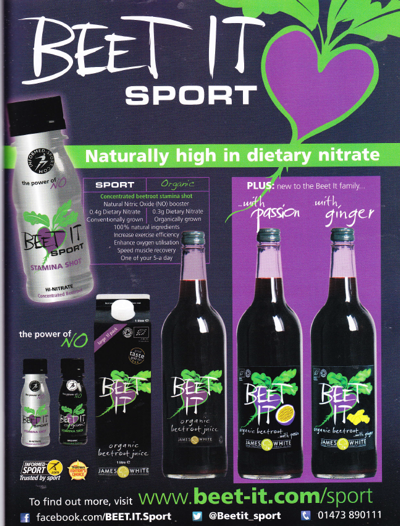 The ad for Beet-it beetroot juice by James White Drinks Ltd appeared in the October issue of What Doctors Don't Tell You and stated:

We were originally told that the ASA were going to deal with our complaint against this ad under their formal investigations. They were going to ask the advertiser for evidence to substantiate the claims they made in their ad.

However, the advertiser agreed to remove the claims from the ad and agreed not to use them again, so they get a mention on the ASA's website today.

Some advertisers seem to be unaware that if an adjudication against an ad is upheld by the ASA or if they have agreed to remove claims in an informally resolved case, this doesn't just apply to the ad that was complained about. Misleading claims in one ad are just as misleading in an ad in another medium and they also have to be removed.

This is particularly pertinent where the advertiser is making the same misleading claims on their website — these must be removed as well.

On that day, new EU-wide rules on health claims came fully into force to join nutrition claims, which have been covered since 2009.

'Health' claims are those which refer to a relationship between a food or ingredient and health. 'Nutrition' claims refer to the nutritional benefit of a food.

As many of our supporters will be aware, there are problems with many claims made for food and drink products. Of concern here are claims about health and nutrition.

The new rules that came into force last week are based on REGULATION (EC) No 1924/2006 OF THE EUROPEAN PARLIAMENT AND OF THE COUNCIL of 20 December 2006 on nutrition and health claims made on foods. That's a bit of a mouthful, but it essentially boils down to the fact that only claims that have been authorised by the European Food Safety Authority are now permitted.

As the Department of Health put it:

There are common-sense interpretations of the wording of claims. For example, a food that claims to be 'low in salt' may only be made:

There are even lower values for claims for 'very low salt' and 'salt free'.

EFSA started by considering over two thousand health claims that manufacturers wanted to make. However, after looking at the evidence, they whittled them down to 241. That is still quite a number of claims that consumers have to contend with and weigh up. The full list can be found in the EU Register on nutrition and health claims — this will change as manufacturers submit new claims and scientific evidence that convinces EFSA that they should be authorised. That list also gives the 1,076 claims that they have not authorised.

So, for low salt content, the authorised health claim must be:

These regulations standardise claims and allow consumers to more easily understand the claims that are being made, rather than being confused by a myriad of 'clever' marketing ways of saying the same thing.

The ASA has always dealt with food claims in advertising that was within their remit. With these new regulations in place, the ASA have amended the CAP Code to match.

Past ASA adjudications will be applicable to the extent that they relate to the interpretation of a claim. However, for the most part, when it comes to the evidence required to substantiate a health claim, the new regime will supersede previous ASA adjudications. This means that health claims which the ASA may previously have accepted may no longer be considered acceptable (as this adjudication shows) and vice-versa. Please see our AdviceOnline article Food: Health Claims here.

Any general health claims in an ad will need to be accompanied by a specific authorised health claim. ‘General health claim’ is likely to have a fairly wide interpretation; it will not just apply to claims such as “healthy” and “good for you”, but also claims like “superfood”. This requirement is stricter than the previous position when advertisers were required to hold evidence for such general claims because it requires that the specific authorised health claim is stated in the advertising copy. Please see our AdviceOnline article Food: General Health Claims here.

We hope that the advertiser appreciates that they have responsibility to abide by the CAP Code and remove those misleading claims.