The continuing saga of Holland and Barrett

This really should have been very simple — and sorted out a long time ago.

But it seems they didn't know. After a complaint from us, the MHRA told them to ensure they complied and Holland and Barrett told the MHRA they would take action to rectify the situation. That was at the start of 2012.

Then in July, we found out that they were still not complying with the regulations, so we submitted another complaint to the medicines regulator.

We sent them photographs sent in by our supporters from eight Holland and Barrett stores up and down the country that still had the point-of-sale advertising that the MHRA had told them was not permitted.

Note the different format of the advertising in the Stortford store.

This sorry tale started last December — and it's still not successfully concluded.

As reported on The Twenty-First Floor, and although it took the MHRA some time — and some prompting — their ruling on our last complaint was finally published on their website today:

The Nightingale Collaboration complained to the MHRA about point of sale advertising of Nelson's homeopathic products in six Holland and Barrett stores and advertising on their website. The complainant was concerned that the advertising included indications for use but the products were not licensed with indications. A similar complaint investigated in November 2011 concerning the same point of sale materials and website was upheld and Holland and Barrett had agreed to withdraw the materials from all stores and review their website.

The MHRA upheld this complaint. Holland and Barrett stated that the advertising materials were displayed in a small number of stores due to a miscommunication. They issued another communication to withdraw the advertising from their stores and amended the information on their website.

When the MHRA informed me of the outcome at the start of last month, they said:

Holland and Barrett have agreed that we can make a copy of their response to your complaint available to you. This is enclosed and provides their comments on this advertising feature and addresses the concerns raised in your email of 12 July 2012.

In Holland and Barrett's response to the MHRA, they stated:

We were made aware around middle of July 2012 that a very few H&B shops had not removed the booklets as we had instructed late last year. It had come apparent that this was due to some stores having another booklet that was not displayed to customers but was sent out by the suppliers 'Nelson' previously to help our store staff with knowledge of the products. Hence certain stores assumed that this was the booklet referred into the recall and not the one that was displayed.

Therefore we re- issued a new memo to the stores clearly advising of the booklet displayed on the shelves next to the products that need to be removed. Please see attached a copy of the memo sent. We have called all the stores listed in the complaint letter and they have all removed the displayed booklet and sent it back to depot since this revised memo was issued.

It was all a mix-up and miscommunication, apparently.

But at least this new memo made everything clear:

"WHICH REMEDY DO I NEED"

Subject:           Nelsons Homeopathic Booklet "Which Remedy do I Need"

Reason:           MHRA Complaint – Booklet is making medicinal claims that are not allowed

A recall was put on pulse back in December 2011 for these booklets to be removed and returned back to depot, however it has been bought to our attention not all were removed and/or returned.

Therefore can you please check if your store still has this booklet on display or is still available in your store.

If so, remove the booklet from display/store immediately and also any other POS notices with the Nelsons range products that have a reference to the booklet.

Nelsons Homeopathic Booklet "Which Remedy do I Need"

Action Required – Please check to see if you still have the above booklet in your store next to the Nelsons Homeopathic products or in store, if you do then remove immediately, place in an envelope (with your store name and number on the front) and return to the warehouse with your delivery driver for the attention of Technical Services.

You'd have thought that that would be the end of it and that all Holland and Barrett stores would all now be complying with the medicines regulations.

Blogger Josephine Jones sent us a photograph she took in the Trafford Cernte in Manchester this morning: 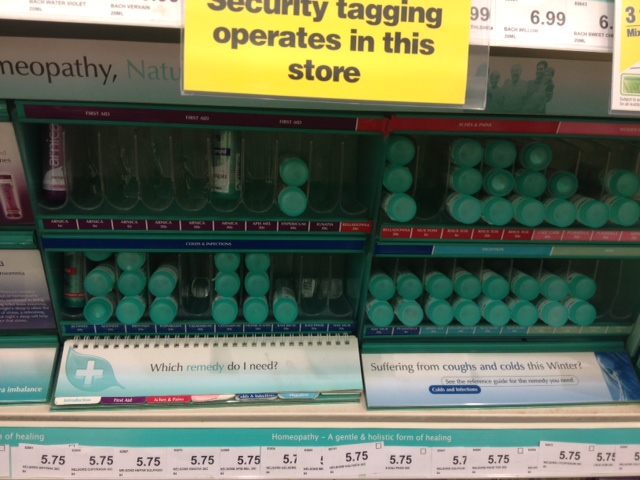 Needless to say, a third complaint has been submitted to the MHRA.